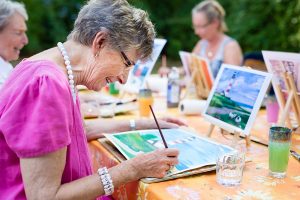 Prior research has shown that some cognitive (thinking) skills tend to decline as people get older, although there is a lot of variability in rate of decline. Evidence suggests that those who retire are at risk of steeper declines because they are no longer exposed to the stimulating environments found at work. Jobs can keep people mentally active by requiring them to remember details, plan projects, and solve problems. Some people may not find ways to include enough of these types of mentally challenging activities in their lives after they retire, and this may lead to cognitive decline.

This MIDUS study looked at who is most at risk of experiencing a decline in their thinking skills after retirement and whether personal motivation plays a role. Researchers looked at changes in cognitive abilities over a 9 year period, comparing results between those who did and did not retire. Cognitive ability was measured by activities that tested:

To test people’s motivation to participate in challenging mental activities after retirement, researchers looked at how likely participants were to disengage from their goals. “Goal disengagement” indicates a person’s tendency to lower their aspirations rather than to continue striving toward difficult personal goals or completing challenging activities. This was measured by how much participants agreed with statements such as:

Results suggest that not all who retire experience greater declines in cognitive abilities when compared to those who remain employed. Instead, those who retired experienced declines in episodic memory if they were more likely to disengage from their goals. Additionally, this association was only true for females. There were no significant results for executive functioning, and men high in goal disengagement were not at risk of cognitive decline. The authors speculate that women may be more likely to see declines in episodic memory because they:

Additionally, women reported having less education, less income, and less prestigious occupations than their male counterparts, so may enter retirement with fewer economic resources that can buffer against losses in cognition.

This study suggests that the use-it-or-lose-it hypothesis applies to retirement, but the need to replace work-related mentally challenging tasks with similar activities in retirement may be particularly hard for those who are prone to disengage from difficult tasks and goals. Those high in goal disengagement may not be motivated enough to take advantage of new opportunities that present themselves after retirement.

Read the full article at: http://www.midus.wisc.edu/findings/pdfs/2077.pdf