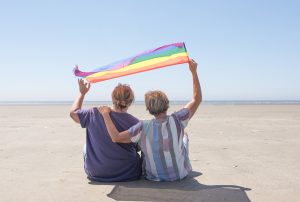 Research has shown that the experience of menopause varies from person to person and from culture to culture. For instance, in Japan, menopausal women seldom report hot flashes but instead commonly complain about shoulder stiffness. In Western societies, some women find the transition to menopause emotionally difficult, given the cultural importance placed on a woman’s youth, beauty, and ability to have children. Little is known about whether lesbian and bisexual women, who often hold less traditional gender beliefs, also have negative feelings about menopause.

With a sample of almost 3500 women, aged 20-75 years, this MIDUS study looked at whether feelings about menopause differed between those who identified as heterosexual vs. those who identified as either lesbian or bisexual. Researchers chose to call this later group “sexual minority” women, rather than using other appropriate terms such as “queer,” to emphasize the fact that this group is underrepresented in research about older women.

Participants answered questions about whether they had feelings of regret or relief regarding the end of their menstrual cycles. Researchers also looked at their feelings about traditional views of femininity, with answers to two questions about getting older:

Some women may worry about being attractive as they get older, considering media encouragement to seek treatments to recapture their youthful beauty and time spent on grooming and makeup to enhance their appearance. Women may also grapple with worries about losing their fertility, since women are often pressured to become mothers. Researchers hypothesized that sexual minority women would be less concerned with these aspects of aging, perhaps because they have fewer opportunities to have children, or because they may have rejected motherhood and standards of attractiveness that they see as part of stereotypical gender roles.

Therefore, this study supported the notion that negative emotional responses to menopause need not be universal. It further showed that sexual minority women may have psychological strengths that help guide them through this important milestone, including perceiving greater gender flexibility that may help them be less vulnerable to pressures to conform to Western cultural standards of femininity and youthfulness.

Read the full article at: http://www.midus.wisc.edu/findings/pdfs/2297.pdf