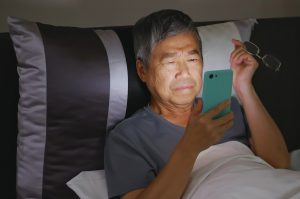 Social media use (Facebook, Twitter, MySpace, etc.) has become a key part of American social life. Many report spending over two hours a day connecting with others on social media, which is more time than they spend socializing face-to-face, eating, exercising, or completing household activities. Although a lot of research has addressed how increased social media use is affecting psychological well-being, little is known about how it impacts physical health. This study used MIDUS Refresher data to look at whether social media use is associated with chronic inflammation, which contributes to many illnesses, including cancer, diabetes, and heart disease.

Inflammation was assessed by measuring blood levels of two inflammatory markers, C-reactive protein (CRP) and interleukin-6 (IL-6). Participants reported on how many times a day they used social media to contact friends or contact family members who did not live with them. Researchers also looked at levels of self-esteem, which was measured by how strongly participants agreed with statements such as, “I certainly feel useless at times,” or “I take a positive attitude toward myself.” Studies have suggested that social interactions can have vastly different effects on people depending on their level of self-esteem.

Results showed that social media use was not directly associated with levels of inflammation (either CRP or IL-6). However, when self-esteem was taken into account, a significant association was found:

Why does self-esteem matter? Social media use may be more stressful for those with low self-esteem:

In contrast, people with high self-esteem are less worried about rejection, and are more likely to focus on the positive aspects of interactions, accepting compliments as an affirmation of their positive self-views.

Read the full article at: http://www.midus.wisc.edu/findings/pdfs/2372.pdf