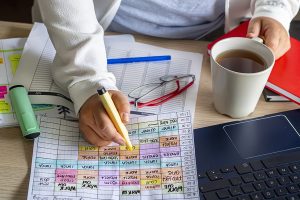 Meritocracy is the belief that success in life is based on personal effort—i.e., those with skill who work hard will be rewarded, with better jobs and higher incomes. This popular U.S. belief is a basic component of the American Dream. At its core is another belief in an “even playing field” where anyone can rise to the top based on merit and hard work. However, little research has been done to look at whether hard work actually results in status attainment for everyone. This MIDUS study fills that gap, but shows that, contrary to popular belief, hard work seems to mostly benefit those who come from privileged backgrounds.

To measure hard work, researchers looked at how persistent people were in striving toward their goals. Participants indicated how much they agreed with statements such as:

The guiding idea was that those who exhibit strong persistence likely invest more effort toward their goals and thus would attain better life outcomes than those with less persistence.

When measured by age, results showed that:

Thus, persistently striving toward one’s goals seemed to pay off mostly for young adults and those with higher family resources. Meritocratic beliefs and the American Dream encourage everyone to work hard so as to achieve their goals, but these results seem to suggest that those from more disadvantaged backgrounds do not get as much benefit from their hard work. Perhaps those of lower SES lack the opportunities and resources that those from higher SES backgrounds can take advantage of in pursuing their dreams. If this is the case, then believing that upward mobility is based on personal attributes needs to be amended to take into account structural advantages that benefit some but not others. These findings thus illuminate widening social inequalities that are becoming more apparent in American society. The authors suggest that more research is needed to explore this disjunction between the American Dream and how it actually plays out in people’s lives.

Read the full article at: http://www.midus.wisc.edu/findings/pdfs/2585.pdf